In my work at the Art Symposium in Slovakia (July 2014) I was studying just that.
On my two canvases I had a personal task to represent the reflected and projected light. I chose a quite graphical solution, using just 3 colors: black, to represent the darkness, white – light and ultramarine – for more visual accent, as well as to represent an extension of invisible ultraviolet light (as a part of the any light dispersion).

A simple well know rule of the light behavior, the angle of projection is equal to the angle of reflection, was a key point of the work. Each light line was to be bouncing from the surface at the same angle. I made this work 3D, by adding foil objects to represent a perfect condition for the reflection. Those surfaces were tilted at different angles to the canvas. My viewer could see the reflection of the light line and follow it’s reflection, it would even give an allusion of transparency of the metallic foil. Look at the sketch bellow:

Any painting is a reflected light though. To introduce the projected light I decided to make my work interactive: I found a flashlight with a laser which I would invite my viewers to point on the artwork. This addition made the work more exciting, not you could see the light behavior in action. Foil worked as a perfect reflector and would transfer the light to the canvas or the wall, depending on the tilt of the foil. You could even trap the light in the triangles of facing each other foil surfaces.

Both of the works will remain in Slovakia, will be exhibited for one month after the art symposium and the funds from the artwork’s sale will go for supporting the future Multipoint Art Symposiums.

The progress of the work is shown bellow. 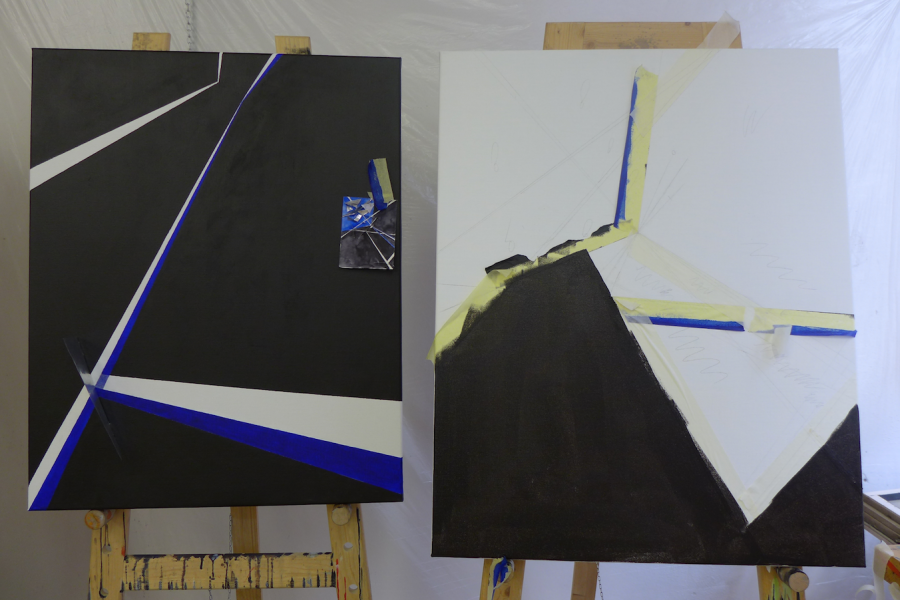 One thought on “Studying “Projected and Reflected Light””