One of the most interesting parts of our trip to India was visiting a silk district in Varanasi. The area was mostly islamic, we could see a dominant religion throughout: islamic scripts on the wall signs, particular fashion. The district was poor, buildings are in a bad condition, dirty streets, rubbish on the floor. We were taken through the tiny alleys, followed by children who kept on asking for a “pen”, I don’t know why that they all wanted a pen, I really regretted that we did not bring markers, pens and pencils to give out. Often we would see domestic animals like goats, donkeys, hens and roosters. It felt like we were in a little village in the middle of the big city of Varanasi.

What shocked me so much is that in the middle of this poverty and dirt I would discover a glowing treasure in the shape of delicate silk in the middle of the dark room. This silk would catch a tiny speck of light and reflect it with a fire of color, I would notice the sophisticated pattern then.

Our guide took us through the stages of silk weaving. 1st stage is to design a patten, then men would make a punch card, following this pattern. Cards would be united in a row and charged into a textile machine (loom, read about looms). Most of the machines were hand operated, however sometimes we would walk into a very noisy room with a few machines running, it was so noisy there, that you could not hear yourself speak. 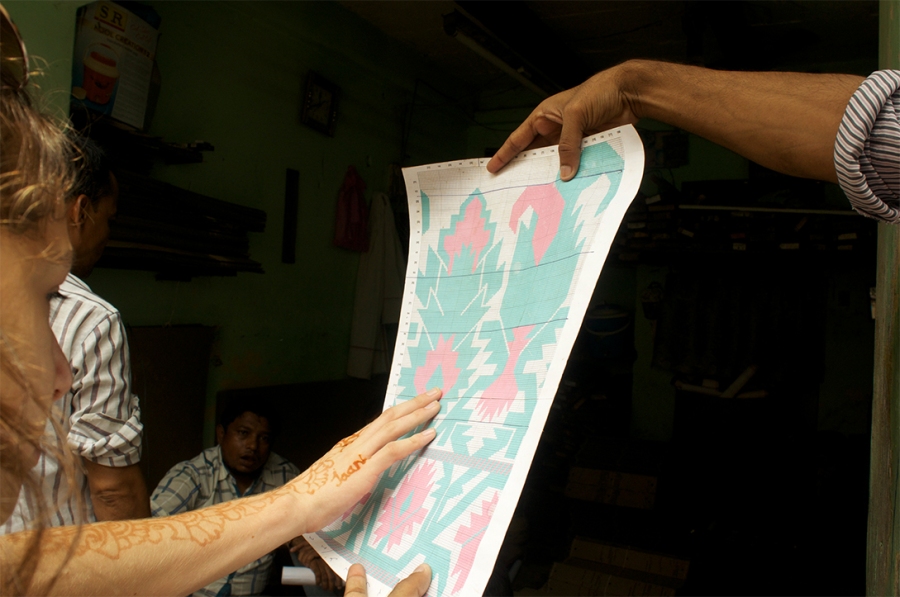 All of the machines looked very old and well used. The technique of textile making was mesmerizing to me. The punch cards would dictate that pattern, by lifting some of the threads up so the master could push the silk thread through (a wooden shuttle would carry the thread). Then the machine would lift up the opposite threads and the master would slide the loom back. And on and on, hour after hour, day after day, week after week till your beautiful silk scarf/ bead spread/ dress would be ready.

I understand why we were taken through the stages of making 1st, so when we went shopping we would appreciate the labor involved into the weightless shiny textiles and would pay good money.

If the textile would require a more elaborate work of hand stitching and decorating, then it would be given to a woman for the further work.

We were invited to go shopping next. We only visited one shop, but they said that each shop carries the same assortment. The shop was in a three-story building, each of them was filled floor to ceiling with shiny silk. We were invited to take our shoes off and take a seat  in the perimeter of the room on a cushion that occupied the whole floor. They asked if we would like to have some chai- masala. We all wanted to try so one of the assistants disappeared for a few minutes and came back with a set of poorly made pottery tiny cups (so classic one time use all around India) and a plastic bag!! filled with hot tea. The tea was great, milky, sweet and aromatic.

We started shopping which began with a color show. The salesman was opening up and displaying his impressive silks, one after another he would go through them in front of us. Each of them made us amazed. If one of us would like something, we were asked to pull it towards us, so the treasure would not get lost in the pile.

I have purchased a beautiful silk scarf for my mother, a scarf for myself and a shawl of kashmir. In India you must haggle. So we all did. We were able to negotiate our price so much lower then we were offered to begin with, but I am sure we still overpaid, but then we did not feel bad, we felt happy to pay for such hard work the money it deserves.